It has been a bumpy first two days, but overall the experience has, from what I have gathered, been enjoyable. Luckily, we have been working diligently on fixing all bugs and getting new content out for all of you.

Below is a list of tonights updates followed by updates previously applied and posted in discord.

At last, the last man standing minigame has arrived! It is an almost identical replica of OSRS’s minigame and contains some juicy rewards. The game is simple; you join by talking to Lisa, east of home. You will then be put in a lobby and the game will start when a minimum of 6 players have joined. You will gain points based on how many players you kill and which placement you get. During the game, loot crates will spawn containing upgraded gear & weapons. After each kill, your stats & supplies are replenished.

You can read more about the minigame here: https://oldschool.runescape.wiki/w/Last_Man_Standing 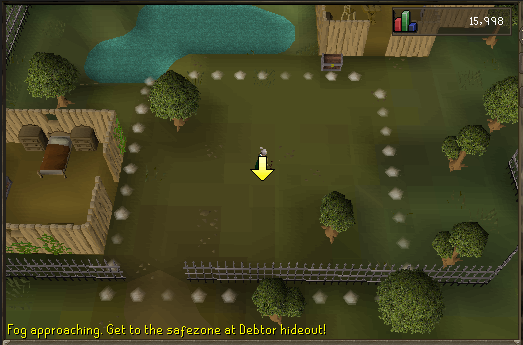 The real entity overlay from RuneLite has been added and the ammo plugin will now be positioned properly. You can toggle between displaying percentages or HP.

Every 50 vote tickets claimed, 60 minutes of 15% Bonus XP will be activated. This stacks with other bonuses and will ge a great incentive to vote.

A bug causing NPC deaths to not count, drop items and slayer tasks not being counted towards has been resolved. This would happen when someone was multi attacking (e.g. barrage) NPC’s > 100 combat, for example greater nech’s in Catacombs and would effect everyone on the server. This is also the reason to the two minor crashes today. Sorry for the inconvenience!

As requested, players now have a chance at receiving prospector pieces when withdrawing ores from motherlode mine. The chance is based on the amount of ores you have deposited and your mining level, just like with the level of ores you receive. Note that you may get duplicates, but the pieces are tradeable.

* Fixed clan chat formatting and scrolling.
* Players may now hold down shift & click whilst inside bank to withdraw all/deposit all.
* Combat no longer interrupts typing in PM’s/adding friends.
* Fixed angler pieces not granting proper bonus XP.
* Enabled players online widget on the website.
* Players may no longer teleport from pest control games or lobbies.
* Fixed trading inside the wilderness.
* Fixed the furnaces not being usable at home and donator’s zone.
* Fixed event key hovers showing wrong items.
* Fix to event timers not displaying properly in quest tab.
* Fixed a logic issue with superior crystal chests not announcing certain rewards and giving wrong items.
* Fixed extreme XP mode XP drops being too high.
* Moved the kalphite teleport to a safer location.
* Fixed black dragons drop table being empty.
* Fixed the pathfinding at black dragons in revenants dungeon.
* Added slayer information to the purple tab in quest tab.
* Fixed a glitch with the bank tab sprites.
* Fixed an exploit with opening the bank anywhere (Thanks to X & Khaled).
* Fixed shaft fletching requirements.
* Fixed a crashing issue with Zalcano.
* Fixed wilderness slayer not giving points after 5 tasks.
* Changed requirement for receiving slayer points from 5 consecutive -> 3 consecutive tasks.
* Krystillia will now combine your slayer keys to a wilderness chest key if you talk to her with all three pieces in inventory.
* Fixed an exploit in FFA where you could upgrade items using these items (items weren’t actually smuggled out but would count towards the task for example).
* Fixed achievement points from daily/weekly tasks not saving on your account.
* Removed tracking & rewarding of old achievements. This should no longer happen.
* Increased loot chance on receiving skilling outfit pieces to 1/20 from supply crates.
* Fixed duplicate entry in master clue rewards.
* Fixed the Mage Arena II bosses sometimes not giving loot/not spawning properly.
* Fixed magic vs NPC’s being bugged and not doing damage properly when on a slayer task.
* Added hover info for the antique lamp showing extreme mode XP.
* Added hover info to the crystal ring, informing of its auto-crystal key pickup effect.
* Fixed an unwalkable spot in wilderness.
* Fixed some broken map data causing pathing to be wonky.
* Fixed duplicate right click options on the clan chat interface.
* Tweaked the attack distances of certain GWD Bosses & Minions.
* Players may now loot the bloody key at any combat level, however they can be attacked by anyone
whilst carrying it, regardless of their combat level.
* Fixed NPC’s no-clipping into the upgrade table.
* Significantly increased gem cutting experience.
* Slightly increased thieving experience.
* Fixed extreme XP mode showing up as hard XP mode in player lookup.

I hope you will enjoy these updates, and keep reporting any discrepencies you may find!