After a rough weekend with both website & server host downtime, we’ve finally reached a turning point and with that a BIG update. I also urge each and everyone of you to read up and prepare for the Duo Ironman competition that is coming up on friday. You can read more about that here: https://rigour-ps.net/forum/topic/duo-ironman-game-mode-competition-win-1b-osrs-gp-1k/

Anyway, let’s jump into the updates!

A whole new, custom perk system has been added to the game. You can access it at any time by using the orange icon in the top right corner of your game screen. 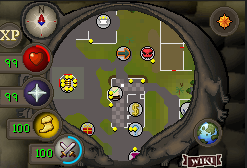 Perks that are unlocked will last forever. I’m not going to list them all here as you may view the description and requirements of each one on the interface. You may also view which in-game activities give points by clicking on ‘Points guide‘. All of these activities may be repeated as many times as one would like.

These perks add another dimension to the game and will prolong your grind & make it more enjoyable. You may view how many ‘Rigour points‘ (which is used to unlock perks) you have by viewing it in your personal (purple) tab in the quest tab.

A new plugin has been added; regeneration timers. This will properly display the hp/special orb regain and the special orb now drains properly based on the amount of special attack you have.

Your bank tabs will now work properly & allow you to create new tabs whilst in resizable/fullscreen mode.

After a few bugs and hiccups with it, we have taken our time to rewrite it to (hopefully) ensure that the issues with it are fixed and that you can start using it seamlessly. Sorry about the issues & enjoy!

The appropriate dragon thrownaxe special attack has been added to the game. It is commonly used on OSRS to make nice combos and stacks as it has an instant special activation, just like the granite maul.

The repair costs (at 100% degradation) are as follows:

The collection log for this box has a whopping $50 bond as a reward. 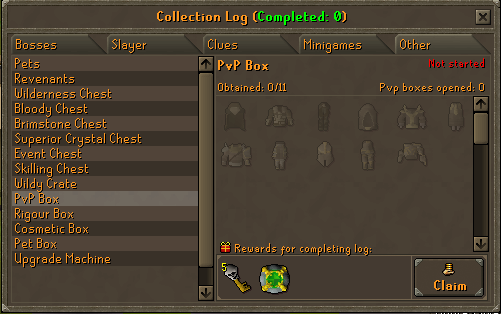 The redemption prayer has been added and now functions the way it should.

The preserve prayer now works and keeps your boosted stats boosted for a 20% longer period of time.

Finally, we have confirmed the issue with items being duped/changed upon reclaiming them from the Weird Old Man fixed. Sorry for the long wait – this issue has been really nagging at us. Big thanks to Mertboy2 for figuring out how to consistently replicate it!

Some new upgradable items have been added to the game. Below follows a description.

Instead of being on the Wraith key drop table, this item is now upgradeable. It requires Wyrm Shard x3 & Boots of Brimstone to upgrade.

This upgrade requires an Abyssal Shard an Abyssal Head & an Amulet of Fury. It shares the stats of a fury but has 1,000 direct teleports to the abyss. After the charges are used the shard is consumed. This item is untradeable.

This upgrade requires a Crystal Bow & a Zilyana Godbow. The bow shares the stats & effects of a Crystal bow but with +10 ranged strength and unlimited charges.

While we wait for the Abyssal Sire re-write to be finished, we have added back the old combat strategy for it. This was a mistake to remove in the first place.

Fixed the issues with mage/range attacking outside of mage bank getting you stuck.